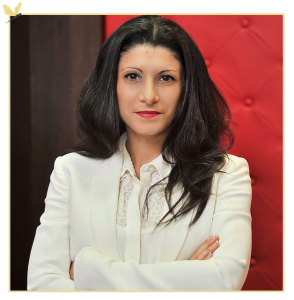 Among Leena’s notable awards and honors are being selected as a Wall Street Journal ‘Woman of Note’, and listed among Bahrain’s Most Influential Women in Business in the Gulf. She is also a Fulbright scholarship recipient, a Dalai Lama Fellow, and is the author of Compassionate Counterterrorism: The Power of Inclusion in Fighting Fundamentalism.

Leena began her career at Gulf Hill & Knowlton at the age of 18 years old. She previously worked at the Bahrain Ministry of Foreign Affairs, and as a communications and events consultant, organizing high-profile events like ‘Forum for the Future’, convening Middle Eastern heads of state and G8 Foreign Secretaries.

Awards and Honors Education and Qualifications